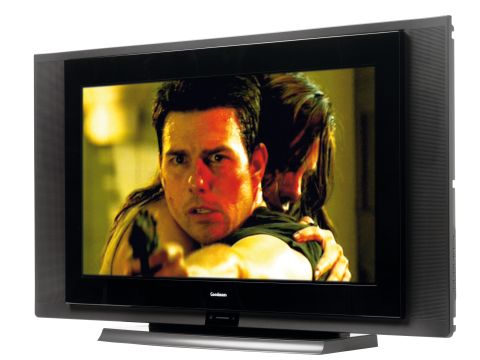 Unsurprisingly, the LD2661HDFVT isn't going to win any prizes for build quality

Superbly affordable, but perhaps one or two too many compromises have to be made

With most TVs in the 26-inch class costing £600 - only marginally less than some decent 32-inch options - we really had started to think that maybe the 26-inch price level had bottomed out. And then along comes Goodmans with the LD2661HDFVT, yours for the almost unbelievable sum of £350!

Unsurprisingly, the LD2661HDFVT isn't going to win any prizes for build quality, but at least it's black, not plastic-looking silver.

In terms of its key specifications, the LD2661HDFVT has one or two pleasant surprises in store.

For starters, it's fully HD Ready, thanks to a sufficiently high native resolution of 1366 x 768, a solitary HDMI input, and a component video input. Plus it's got a digital tuner, and a PC input.

There inevitably isn't much to get excited about in the set's onscreen menus, though: the only remotely interesting things are a film mode for enhanced progressive scan with movie sources, and noise reduction.

It's actually quite difficult to know where to stand with the LD2661HDFVT's handling of our Mission: Impossible III test HD DVD. On the one hand there are aspects of its performance that clearly fall short of rivals in this class. But on the other it arguably outperforms its revolutionary price point.

Let's get the weaknesses out of the way first. For starters, black levels aren't particularly great. The scene where Hunt swings onto the top of a Shanghai building takes place against a night sky that's distinctly grey rather than black.

Colours leave something to be desired. The richly hued scenes around Vatican City look pallid, and skin tones seem slightly off.

Finally, fast action scenes, like the set piece on the Florida Keys waterway, suffer much more than we'd like with LCD's motion smearing problem.

None of the flaws described are absolutely dreadful, by any means. They're all arguably liveable with for £350, especially as the picture has one or two genuinely good points, too.

Daylight scenes like the Florida Keys attack, for instance, look dynamic and bright, and fine detailing is decent during the ultra-sharp scenes in Hunt's own home. What's more, this Goodmans TV has a better crack at standard definition than some sets costing twice as much.

Thin on the ground

The set's audio, however, is rather sub-par. Voices sound dislocated from the action, especially during action scenes, and a scary shortage of bass leaves the soundstage sounding thin and overbright.

In the end, this 26-inch TV's overall performance is the worst in its class, and we've had to reflect that in its performance scores. But that doesn't alter the fact that the quality on offer is rather better than it really ought to be for £350.