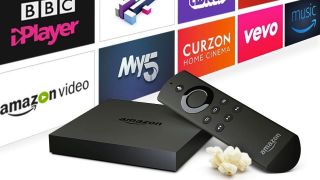 If, by some freak of nature, you were actually born not as a flesh-and-blood baby human, but as plastic-and-circuitry remote control, I'd be getting worried if I were you. Not for being a crime against all biological reason but as, thanks to the ever-growing presence of voice activated assistants, you're about to go the way of the dodo.

That's a long (and, admittedly weird) way of teeing up the fact that Amazon has finally seen fit to allow all Alexa devices – whether it's an Echo, Echo Dot, Fire tablet or other – to control Fire TV devices through voice commands.

So whether you're rocking an older Fire TV stick generation, or the 4K-ready Fire TV box, you'll want to be warming up your vocal chords.

Considering Amazon's heavy inter-connected Alexa push, you may be surprised to find that the feature isn't already available on the TV range. But the update, after many a grumble from Fire-fanatics, is finally rolling out over the air.

Commands including playback controls (play, pause, rewind, etc) are supported, letting you pause The Man in the High Castle from your bedside Amazon Echo Dot because... why not?

The update should automatically install to idle devices, so you literally don't have to lift a finger to take advantage of the new features.