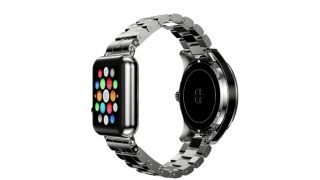 While some luxury watch makers, such as Tag Heuer, have joined in the wearable revolution by creating their own smartwatches Nico Gerard - a California-based luxury watch company - has taken a slightly different approach.

It's created a regular analogue watch (the Skyview Pinnacle) with a bracelet that allows you to attach a 38mm Apple Watch to the other side.

Nico Gerard's Skyview Pinnacle comes with a 41mm stainless steel case that's water resistant, but will probably end up getting overshadowed by Apple's timepiece on the other side.

If you fancy splashing out a serious amount of cash on a rather silly looking premise, then Nico Gerard is currently taking preorders, with the watches shipping in the next 10 to 12 months.