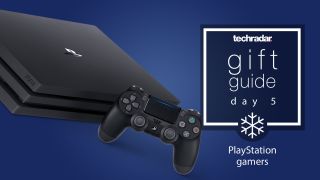 It’s still the best time to be PlayStation fan after an incredible 25 years since the original system came out.

PS4 and PS4 Pro consoles are still flying off the shelves, with big-budget games like Borderlands 3 and Call of Duty: Modern Warfare alongside console exclusives like Death Stranding, it's hard to disagree that Sony handily won the current console generation.

If you’re buying for the gamer in your life – or yourself – we have all the best Christmas gifts and holiday items for PlayStation fans right here.

For folks who haven't yet jumped on the PS4 train, or who could upgrade to the more powerful PS4 Pro console, this is your bundle. (Why upgrade? Unlike the PS4 Slim, the Pro can upscale games into more detailed 4K resolution.)

This bundle packs in a whole terabyte (1000GB) of storage, perfect for downloading and storing an entire library games, which can take up a good 40-50GB each for big AAA titles - if not more. As part of the package, you'll also get the instant classic Death Stranding, Hideo Kojima's much awaited debut game after leaving Konami - an immersive open-world adventure game about death, babies, America, and beyond.

Want a similar deal for cheaper? Amazon is offering a 1TB PS4 Pro with the brand new Call of Duty: Modern Warfare for $363, a real bargain.

At £349.99 / $399.99 it's not the cheapest item on this list, but as one of the year's biggest games on one of the most powerful gaming consoles, there aren't many gaming experiences that can compare.

In-game currency: the best addition to a free game

Respawn's Apex Legends is the underdog compared to battle royale titan Fortnite, but it's still a solid game - though it's free to play, so your giftee is probably playing it already. Thankfully, you can pitch in by buying in-game currency called Apex Coins.

These coins buy weapon skins, character outfits, and season-long battle passes - all items that customize your character. The same goes for Fortnite, by the way, which has its own V-Bucks that you can buy instead, if your giftee prefers that title.

What do you get the PlayStaton gamer who has everything?

This classic Crash Bandicoot themed Christmas jumper puts a fun spin on usual holiday attire, combining the best of festive cheer with the novelty of Crash's contorted face on your torso.

For maximum effect, couple that with the remastered Crash Bandicoot N. Sane Trilogy or Crash Team Racing, both remixed classics from PlayStation days of yore.

Sadly, the Sony PlayStation Classic wasn't as big a hit as the Nintendo NES Classic and SNES Mini, and sales weren't impressive. But their loss is your gain: the PS1 Classic is discounted far below its launch price everywhere.

Like the other retro consoles, the PlayStation Classic looks remarkably like its inspiration, the very first PlayStation- only smaller - and is packed with gems from that console.

There are a lot of big names missing, likely due to licensing issues and the recent remastered collections of Spyro the Dragon and Crash Bandicoot games. But for a PlayStation fan wanting to revisit the likes of Rayman, Tekken 3, Metal Gear Solid, or Final Fantasy VII, and some other lesser known titles from gaming history, this mini PlayStation console could make a fantastic gift under the tree this Christmas.

Light up your gaming setup

This USB-powered PlayStation Icons Light turns the mundane shapes on your DualShock controller buttons into stylish lighting fixtures. Perfect for a bedside table or overhead shelf to look fondly down on your gaming setup.

Buying for someone prone to long gaming sessions - especially those who team up and chat? This HyperX Cloud Revolver S gaming headset remains our top pick among best gaming headsets for PS4 owners. It offers all-round comfort and capable sound for immersing yourself in games and movies, plus a microphone that plugs into the 3.5mm jack.

It's on the expensive side, but with the quality materials and performance to justify it – even if the microphone can be a bit fiddly to handle. Just the thing to elevate your gaming to the next level.

Spyro! Incense! Merchandising! If you're after a neat novelty gift with a practical use, this could be the one for you. This Spyro The Dragon Incense Burner perches the loveable purple mascot on a stone pedestal with room for a small incense stick inside.

It's not the sharpest-looking toy out there, but for the sake of seeing incense smoke blowing out of Spyro's nostrils, this Activision-approved product may be the one for you.

The gang's all here

Holy iconic PlayStation characters, consumers! These are the cream of the PlayStation exclusive crop, from old school to new instant classic. True, some of these characters have appeared elsewhere, but they either got their start or are only found on Sony's consoles.

POP! make a stunning array of tie-in figurines across film, TV, comic book, games and geek culture in its own signature style. Big head, tiny body, and a whole lot of heart.

So whether you're buying for a serious Spyro, Crash, Aloy or fan, or just someone with an eye for well-made toys, these figurines are sure to go down a treat.

Why be content with your standard DualShock controllers? Controller Modz lets you to customize your own colors, patterns, and styles to create the controller you always wanted, right down to the buttons or triggers.

More than a few customizations will quickly ramp up the cost, but the chance to make your favorite gamepad is . You can also add duplicate buttons, upgrade the internal chip for rapid fire or auto fun features, and even engrave a name or message along the touchpad. The best avenue for a player looking for some personalization.

These retro PlayStation coasters look just like those square plastic disc cases we used to love. With designs featuring Parappa the Rapper, Wipeout, Gran Turismo, and Destruction Derby, there's plenty of PS1 nostalgia to reminisce over while you sip a can of beer or mug of coffee.

There's great attention to detail, while the coasters feature a high-grip felt on the underside to stop it from sliding around the table. Great as coasters or just to have on display.