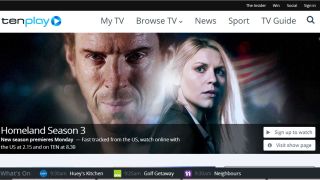 Network Ten is joining ABC's iView and Yahoo7's Plus7 with the launch of its Tenplay app over the weekend.

Tenplay will be launching on web, smartphones and tablets, as well as consoles and smart TVs, with content from across its three channels.

At the moment, it is available right now on iOS and Sony Bravia TVs, Windows 8, Xbox 360, with Android to come later this year and on hybrid broadcast broadband TV (HbbTV) "at a later date".

As well as being able to live stream content, it will also offer catch-up services and a "continuous play feature that enables viewing to 'travel' seamlessly from device to device", Network Ten explained.

It also features recommendations, customised playlists and social media integration. Horne added that more features and functions will also be added in the future.

Available from 2.15pm AEST through tenplay, Network Ten will stream the first episode of Homeland just 15 minutes after it goes on the air the US, at 9.15pm (PDT) Sunday night, making the need for illegally downloading the show pretty much unnecessary.

This option will only be available for the first episode of the new season of Homeland right now, but it seems likely that if it proves popular, Network Ten and other Aussie broadcasters may look into fast-tracking episodes online from the US and UK just minutes of it going on-air overseas – and we don't see why it wouldn't be popular.

Late arriving TV episodes has caused Aussies to turn to torrenting shows like Game of Thrones.

If given the option to have access to an episode at the same time as our global counterparts, we don't see why people would turn away from the easier, more legal avenues to watch their favourite show.

The future looks good with more online catch-up and video-on-demand options on offer for Aussies than ever before, and with new services being added almost monthly.