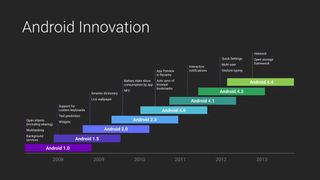 Google had a boatload of new Android L features to show off but despite introducing over 5,000 new APIs, Android Chief Sundar Pichai still managed to find the time to sneak in a jab at iOS 8.

On the Google IO 2014 stage, Pichai noted that custom keyboards and widgets have been a part of Android for the last four to five years, clearly a dig at some of the features Apple was most excited to introduce at WWDC 2014 just a few weeks ago.

The head of Android continued to say he wants Android to innovate faster. Further, the plan is to introduce new features as soon as possible.

"The approach we're taking is very distinctive," Pichai said. "We're building an open platform at scale, and will be able to touch billions of people."

Fighting words from Pichai but we could just as easily see how Android L's new Material Design interface looks pretty similar to the flat look Apple introduced with iOS 7.