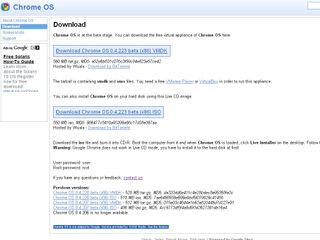 Reports of Chrome OS arriving for the masses look to be premature, with the site that is being pushed containing a proviso that the content is nothing to do with Google.

A report went up on a major website which sparked a Twitter furore, but the article is now gone and only the echoes remain.

The facts certainly stack up; the site at http://sites.google.com/site/chromeoslinux/download is not what you would expect an official release to be hosted on for one thing.

The lack of an official post from Google announcing the build is a second, but the real clincher comes on the very page itself

"Chrome OS is not related to Google," says a footer on the page "Service provided by SUSE Studio. See the license."

Google is not making an official denial, yet, although you may be entitled to ask how long the ChromeOS branding will continue to be used if it is not ratified by the company.

For the time being, don't expect this 'Chrome OS' to be the Google OS that is set to hit netbooks by late next year.