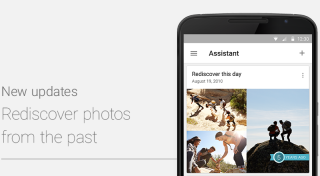 Perfect for a Thursday announcement, Google's latest update to its powerful Google Photos app will now let you 'rediscover' moments from your past.

On any given day, the opt-in feature will show you photos and videos that you took from the same time during previous years, similar to Facebook's On This Day feature that was launched back in March.

"Photos help us reminisce about the things we've done, bringing back events from one, two, or even ten years ago," Google said in its announcement.

Of course, the new feature will be private, and if you do choose to turn the feature on, there will be a new card in the Assistant view in the Google Photos app collating an album and collage of the images you took last year.

From there you'll be able to share the photos or video through email and social media, or they can remain private for your own viewing.

The 'Rediscover this day' feature is available through web and the iOS app, with it set to roll out to Android soon.