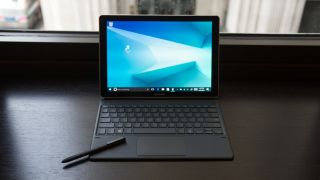 After months of waiting, Australians will finally be able to get their hands on Samsung's new Galaxy Book and Galaxy Tab S3 range on July 28, 2017.

Both devices will take advantage of Samsung's updated S Pen, which now has a pressure level sensitivity of 4,096 and no longer needs to be charged.

The Tab S3 will also be sold in 12-inch 128GB (eMMC) and 256GB (SSD) models, both sporting QHD Super AMOLED displays with Intel Core i5 processors. The 128GB model comes with 4GB of RAM and runs Windows 10 Home while the 256GB model boasts 8GB of RAM and sports the full Windows 10 Pro edition.

As a nice Galaxy Book pre-order incentive, Samsung is offering customers a (very nostalgic) Staedtler Pen and Samsung Multiport adapter (valued at $198) at no extra cost – so long as they order before September 12, 2017.

A new king of Android tablets has emerged

It's been a while since the last major Android tablet release (the Tab S2 and Google Pixel C came out way back in 2015), but now, Samsung has returned with what it hopes will be a major iPad Pro competitor in the Samsung Tab S3.

While it has basically the same 9.7-inch Super AMOLED display as its predecessor (1536 x 2048 resolution with 264ppi), the Tab S3 now supports HDR10 content for added colour depth.

On top of this, the display is now optimised for use with Samsung's new S Pen, allowing users to take advantage of advanced drawing tools and make annotations on the go.

The Tab S3 comes with 32GB of onboard storage, with an additional 256GB available via microSD. It's got 4GB of RAM and runs off a Qualcomm Snapdragon 820 Quad Core chipset (2.15GHz + 1.6GHz).

Unlike the Tab S2, the Tab S3's 6,000 mAh battery also supports fast charging, which should significantly decrease the time it takes to fully juice up your slate. Charging and data transfer is available via the device's USB Type-C port.

The Samsung Galaxy Tab S3, which runs Android N, will be available in a Wi-Fi only model for $949 while the 4G version will be priced at $1,099.