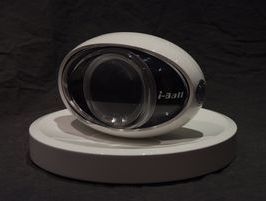 Nikon has shown off its ideas of future cameras, with the camera giant showing off four prototypes at the French 'Hello Tomorrow' show.

Although concept designs are a common sight in the automative industry, a glimpse into the wacky minds of tech RnD labs is rarer - presumably because of the fear of giving the best ideas to competitors.

However that hasn't stopped Nikon from showing off four designs at the show, including an i-Ball (see what they did) and the multi-ball.

The latter, with its multiple lenses offers "multi-views that can capture the atmosphere of a scene," whilst the i-Ball's only explanation is that it's shaped like a rugby ball (and, an eye, obviously.)

Of the other two designs, one comes with a big viewing screen and two adjustable handles, perhaps so you can play some ARG X-wing in between shoots and last but not least is a camera on a stand with a joystick that the rumour-mongers are already suggesting could be for panorama shots.

Of course, there's no guarantee that any of these prototypes will be coming to market, but we reckon Nikon will now be feverishly working on its 'ball of rugby' concept as we speak.

From Nikon Hub, via Engadget / Slashgear