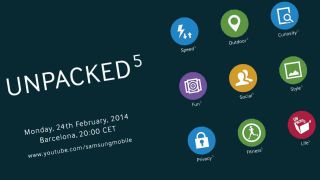 It's all getting unpacked on February 24

It feels like the Samsung Galaxy S5 rumors are coming in by the minute, but the clues on Samsung's latest official teaser are perhaps most telling of all.

The company has tweeted a new MWC invitation adorned with nine colorful, labeled icons, with Speed, Privacy and Fitness catching our eye in particular.

It's no surprise to see Samsung pushing a new focus on fitness in its upcoming smartphone, especially as the S5 is also believed to be arriving hand in hand with the Galaxy Gear 2.

As for privacy, there's been endless back-and-forth speculation about whether the S5 will have some sort of fingerprint and/or retina scanner.

The latest rumor is that the entire screen may actually be a fingerprint scanner. However we're a bit more doubtful about that eye scanner as there's a good chance Samsung isn't quite ready to roll out the technology just yet.

Seeing speed on there is no surprise - the S5 is expected to be faster than the S4 - but that white bolt could be hinting at camera speed specifically.

The teaser may also hint at the new Touchwiz design. Is this what Samsung meant when it promised the S5 would be going "back to basics"?

All will be revealed at MWC in Barcelona, February 24 and we'll be there to deliver the news as it breaks.