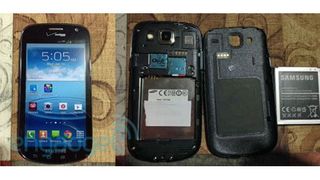 There are plenty of things to assume about the Samsung smartphone codenamed "Godiva," not least that its launch could be approaching, if recent FCC filings are proof of anything.

The Samsung Godiva was identified by the FCC on Tuesday, having been put through the requisite tests that indicate it could be released soon.

This despite the fact that Samsung has yet to even acknowledge Godiva's existence - much less admitted that it's actually the Stratosphere III.

That's another assumption, true, but it's one that's grounded in evidence.

The FCC test results revealed that the Samsung Godiva will be compatible with CDMA and LTE and feature GSM roaming and NFC, a feature that was hinted at in previous leaks.

Beyond that everything that's known about the Godiva came from various leaks, including the Godiva photos that popped up in mid January.

What's really interesting about the Samsung Godiva, though, is that it's almost certainly the next device in Samsung's "Stratosphere" line of mid-range phones (though it lacks the QWERTY of the Stratosphere II).

The original Stratosphere went by the model number SCH-I405, while the Stratosphere II, launched in the fall, went by SCH-I415.

And the Godiva? SCH-I425. So either the Samsung Godiva is really the Samsung Stratosphere III, or Samsung needs to rethink its process for assigning model numbers to devices.