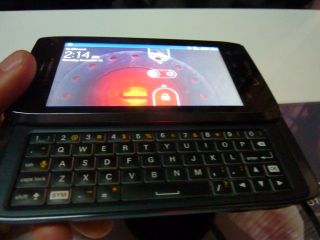 Droid 4 comes to Verizon this Friday

The Verizon Motorola Droid 4 handset will launch on Friday, the carrier has confirmed.

The fourth iteration of the original classic Android handset will cost $200 on a two-year contract with Big Red from February 10th.

The Droid 4 boasts a slide-out qwerty keyboard, 4G LTE connectivity and, with that in mind, Motorola is keen to point out that it's the thinnest-4G-device-with-a-slide-out-qwerty-keyboard at just 0.5-inches.

With Android Gingerbread on board (upgradable to Ice Cream Sandwich), the device also packs a 4-inch LCD screen and a 1.2GHz dual-core processor.

The camera checks-in at eight megapixels, while it will shoot video at full HD 1080p. There's also a front-facing snapper for 4G video chat goodness.

Check out our hands-on with the Motorola Droid 4 from the recent CES expo, where the device was launched back in January.