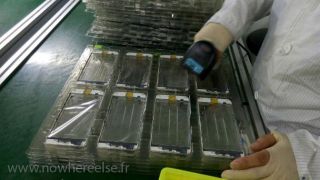 The iPhone 6S is one of the most anticipated handsets of 2015 and the leaks are only just beginning to seep through.

Today we've just seen our first look at the front panel of the new handset directly from the production line in China, courtesy of NoWhereElse.

It's not too surprising that it's set to look exactly the same as the iPhone 6 did.

As per usual it looks like Apple isn't making any design changes this time around and all the extra bits will be included under the hood.

Production for the new panel is in full swing though, showing it's not long until the iPhone launch, and that's exciting news for everybody.

If it has similar specs to the iPhone 6 we can expect a 4.7-inch display with 750 x 1334 pixels but it's not too clear what stuff will be under the hood. We'll likely have to wait until the September event to find out.