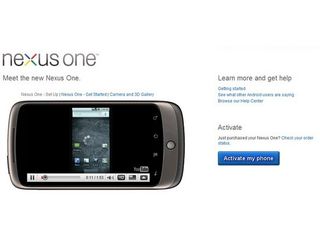 Google's Nexus One page goes up - then down

Google's much-fabled Nexus One phone has been given its own support page by the firm, showing off information on the new device.

The page was quickly taken down by the firm, but not before some users managed to nab a screen grab of the site.

While it's not really a surprise that Google has created a page for its Nexus One phone with support on how to get started and activate it, it's another 'confirmation' that the Android announcement from the firm later today will be the launch of the Nexus One.

The site also offered video walkthroughs, helping users understand how to use the new elements offered by Android, such as the upgraded gallery.

We're looking forward to seeing what the new Nexus One, which has apparently had more Google influence over its conception that ever before, will look like in the hand, but we're pretty sure it's already going to be a contender for one of the top phones of 2010.

TechRadar will be on hand to pick up all the information from the Google announcement this evening, so stay tuned to find out if/when we can expect the Nexus One in the UK.