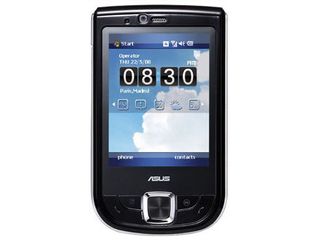 Asus has revealed the world's first smartphone to run on an 800MHz CPU while running Windows Mobile 6.1.

If you consider that in actual computer terms, it's worth remembering that was the same kind of setup that powered a fairly decent PC at the turn of the century, and it is a million times better than the processor used for the moon landing.

The P656 has a 2.8-inch screen with HSDPA connectivity, as well as 256MB of internal memory, using Asus' touch user interface Glide.

Business card recognition is available through a 3MP cameraphone, as well as Microsoft Mobile Office for the business power-users among you.

If you're into connectivity (and who isn't these days with the interweb making life as seamless as cushions by your grandma?) then it's also got the full complement of Wi-Fi standards up to 'g', and good ol' Bluetooth as well.

Oh, and if you're worried about Big Brother tracking you, then watch out... the P656 has got a GPS chip as well.

Not yet available in the UK, and it's possible it never will be, this handset is bringing the power of the PC into your palm.