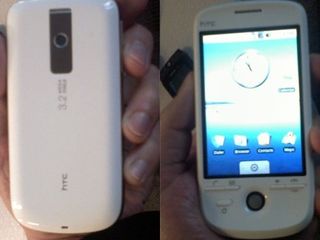 Those of you lusting after Google's Android OS, but unable to bring yourselves to buy the T-Mobile G1... actually, you probably wouldn't want the G2 either.

Blurry shots of the handset (is there anything better for a rumour-phone?) have been snapped over in China, and they give a few more hints into HTC's plans for its next Android handset.

Basically, it looks like a slimmed down, smoother version of the G1. It also seems to be the Sapphire handset we saw as part of the leaked HTC lineup recently.

There's the now-requisite 3.2 megapixel camera, though with no flash apparent on the pictures we'd have to assume there isn't one, which is a bit of a blow for the all-night snap-taker.

Also, unless our eyes and previously leaked specs are deceiving us, where's the QWERTY keyboard that the G1 prided itself on gone? Is the company saying that the iPhone and its virtual keyboard actually has it right?

Well, this bad boy is expected in May, so it won't be too long until we find out. Until then, keep scouring the whole of China for any more news... and let us know if you see anything else cool and Android-ical.