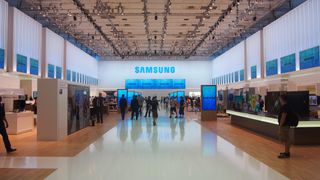 Between the Galaxy Note 5 and now the 5.7-inch Galaxy S6 Edge+, Samsung is notorious for creating devices with oversized screens and soon it could be releasing an 18.4-inch tablet.

A new Android tablet codenamed "Tahoe" popped up on Sammobile's radar and it could feature a screen large enough to eclipse your lap. A Samsung source claims the new tablet, designated internally as SM-T670, could come with an 18.4-inch display but oddly enough a display resolution of only 1,920 x 1,080.

Details also suggest this mega tablet could come equipped with a 1.6GHz quad-core Exynos 7580 processor, 2GB of RAM, 32GB of internal storage (expandable to 128GB with a microSD card), and a 5,700 mAh battery. It purportedly will also have a 2.1MP front-facing camera – and oh yes, it may have an 8MP rear snapper as well for extra obnoxious tablet photography.

We've already seen a few plus-sized tablets including the Dell XPS 18 and the massive 27-inch Lenovo Horizon 2, however, the Tahoe could be the first of these devices running Android.