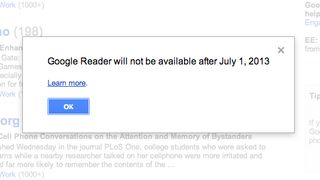 Gone but not forgotten

The reason Google Reader is to be axed isn't just because of dwindling numbers - it's because of a change in the way people consume news, according to a Google executive.

The popular RSS reader suffered continuously dwindling numbers since its launch in 2005, with many people believing that was the reason for its demise.

But in an interview with Wired, Richard Gingras, senior director of news and social products at Google, said that the way users consume news through different devices had changed in recent years, which prompted Google to shut down the service.

Gingras said: "Users with smartphones and tablets are consuming news in bits and bites throughout the course of the day — replacing the old standard behaviors of news consumption over breakfast along with a leisurely read at the end of the day."

Google has tried to adapt to this change in behavior by introducing Google Now, a breaking news app that uses your location and interests to automatically provide you with news that you need before you ask for it. The downside being that it has to learn your habits and interests to properly work.

For those who are still nostalgic about Reader, Google Currents is its natural replacement. But, it's only available on mobile devices and not desktop.