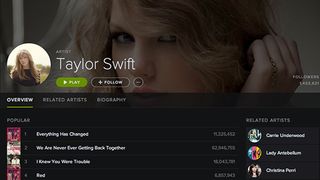 We are never, ever, ever going back to the old Spotify

Music streaming giant Spotify is attempting to make music streaming look as good as it sounds with a new-look desktop client for Mac and PC, which began rolling out to users today.

The revamped app brings a tweaked UI, a darker colour scheme, new font sizes and rounded graphics. It's already arrived with some users, despite Spotify yet to comment on the release.

The Discover tab has seen a tweak to show graphics of varying sizes and the sharing options have been streamlined within a neat graphic.

Meanwhile, the company has also issued a minor update for its app for Android smartphones and tablets.

Have you received the new Spotify client for Mac and PC yet? Share your thoughts on the new look in the comments section below.