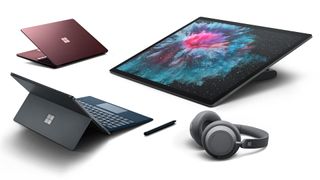 At Microsoft's 'Back to Black' event, the company announced a bevy of new and updated devices including the Surface Pro 6, Surface Laptop 2, Window 10 October 2018 Update, Surface Studio 2 and Surface Headphones.

Starting with the new device we were all hoping to see, the Surface Pro 5 – oops we mean Surface Pro 6. Though it might look an awful lot like the last Surface Pro (now the unofficial Surface Pro 5), Microsoft claims its 67% more powerful than the previous iteration thanks to 8th Generation Intel processors and a redesigned cooling system.

It features the same 12.3-inch, 267ppi display but a higher contrast ratio and battery life has been extended to 13.5 hours. It can be specced to a maximum 16GB of memory, 1TB SSD and now comes in a new black color. You’ll be able to pre-order Microsoft’s newest tablet for as little as $899 (AU$1,349, about £690) for an Intel Core i5 model – which is the best starting price the Surface Pro has ever come in – and it will ship out on Tuesday, October 16.

The oft-rumored Surface Laptop 2 also got its due with a 85% faster 8th Generation quad-core Intel Core processors, quieter keyboard, OmniSonic speakers for premium sound and a new optional black paint job. The display on the Surface Laptop 2 has also seen an upgrade with now over 3.4 million pixels delivering a 1,500:1 contrast ratio.

Microsoft’s workhorse saw the biggest upgrades with newer Nvidia Pascal graphics – though not the latest Nvidia Turing RTX – for 50% greater graphics performance. Unfortunately, Microsoft decided to only upgrade to Kaby Lake processors, which is really disappointing due to the prevalence of newer Coffee Lake chips that feature higher-core counts.

The 28-inch display has now been upgraded to a Brilliant PixelSense Display that is supposedly 500 nits brighter, resulting in a panel that’s 38% brighter and 22% higher contrast.

We were kind of hoping for a phone, but instead we got a $349 (about £270, AU$485) pair of headphones. The Surface Headphones are Microsoft’s first premium pair of smart headphones that’s designed to work wirelessly and deliver noise canceling audio.

Of course, Cortana comes built-in, allowing you to tell the headset to start your music, read your emails or start a conference call with just your voice. So far, Microsoft has only promised that Surface Headphones will be available later this year.

Microsoft didn't waste any time when it simply announced the Windows 10 October 2018 Update will be immediately available starting today. Any user interested enough in it can download the update right now with our handy guide.

There’s quite a number of new features to get excited about like the handy Your Phone app, improvements to Fluent design and sets to set your multitasking on fire.