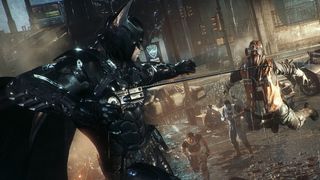 Still working on it...

So, Warner Bros. has issued another update about the Arkham Knight fail.

Do we now have a final (re)release date? Do we know when the delayed Batgirl PC DLC is going to drop on our hard drives? Do we have some free DLC for the pre-purchasers as a token of WB goodwill?

Nope. Warner Bros. has announced that it's still working on a new patch for folk who have already purchased the pulled game and it will be available in August. At some point.

"We would like to thank you for your continued patience and invaluable feedback," says the release.

I wonder if it's the ASCII art in the community comments that it's regarding as invaluable feedback...

On the one hand it's great Warner Bros. and Rocksteady are now trying to bring a little transparency to the Batman: Arkham Knight PC fiasco, but it's also not a little frustrating that all we're getting at the moment is the promise of a potential partial patch for existing players sometime in August.

Things were looking up when Rocksteady itself decided (belatedly) to take the reins of the PC version and pushed out a quick fix for existing players after the game had been yanked from sale.

On my desktop machine performance noticeably improved, even at 4K, and the missing effects were happily restored. As a PC gamer you never want the premium version to be missing out on effects seen in the lower-rent console releases.

Then, a good few weeks later, WB issues a release saying it and Rocksteady are still working towards a full release of the game and that it will be back on sale once "Rocksteady and all parties will agree that it meets a superior quality bar."

This was then followed by a leaked email from Australia saying WB was recalling all physical copies from storerooms across the land as the game was unlikely to be ready again before Spring. Now, before you get too worried above the Equator in Northern Hemisphere speak that's the Autumn.

Still, that's a long way after it's initial release, and quite some time from now.

It's a real shame Arkham Knight has had such a rocky release on the PC. It's a fantastic game, when it's working properly. Sure the Batmobile's a right pain in Batcave but visually it looks stunning and it makes you feel about as Batman as it's possible to get outside of seriously illegal vigilante activity.

I hope Warner Bros. promises of a change to the internal review process assures this never happens again.

It's more likely though that Steam's refund process will hit the wallets of a game's publisher enough to ensure they take PC releases a little more seriously in the future.

Are you playing the PC version at the moment? What are you thoughts on its current state?