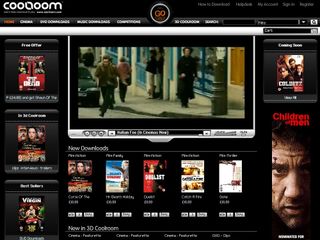 Microsoft has announced details of a new entertainment channel available on the Xbox 360, Windows Vista and Windows XP Media Center. Coolroom is, according to the corporation "aimed at film fans who want to enjoy digital entertainment on TV from the comforts of their own sofa". It's a premium content channel, where you can download programmes to purchase outright or simply to watch once.

Blog: Our first impressions of Coolroom

The Coolroom channel works in conjunction with the Coolroom online portal which will give you a unique PIN to sign-in via Media Center, rather like Sky's premium content.

The website also hosts the '3D Coolroom', a virtual 3D loft apartment where users can watch cinema featurettes and interview clips. According to Microsoft, users can customise and own their 3D Coolroom by uploading and displaying personal media such as pictures and videos.

"We are extremely proud to be expanding the Coolroom service as the first entertainment retail channel launched on Microsoft Media Center in the UK," said Rupert Fleming, managing director of Coolroom.

"With the added benefit of cross-platform compatibility, Coolroom is flexible and easy-to-use," added Mike Haigh, UK Windows client product manager. "It's a great way for consumers to enjoy and experience personalised digital content."

If you want to use the channel with Windows Vista, bear in mind you will need to have one of the editions featuring Media Center; Home Premium or Ultimate.