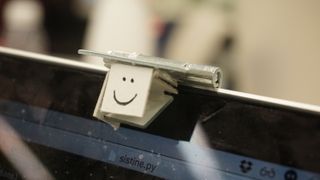 Want to upgrade your Mac and give it a touchscreen? As improbable as it sounds, you can do so with a nifty DIY project that has popped up online, which allows for the addition of touch functionality at the impressive price of just a dollar.

‘Project Sistine’ is a working prototype which can be knocked up for just $1, and consists of a tiny mirror, door hinge, a paper plate plus some hot glue.

The basic idea is to glue the mirror to the paper plate and door hinge in such a way that the hinge can rest on top of a laptop screen, and the mirror points downwards – in front of the MacBook’s webcam – looking at the display.

This means that the webcam can see a finger touching the screen, detecting the reflection of the digit on the display, and in combination with a clever piece of software (called ShinyTouch, which utilizes computer vision tech), this can effectively emulate a touchscreen.

The software needs to go through a simple calibration process initially, but thereafter can detect a finger touching the screen – or hovering over it – and translate that into mouse actions. And this system will work with any app you’ve got running on your MacBook.

As you’ll see if you check out the project’s website, the actual touch functionality looks a little rough around the edges, but then this is still a proof of concept (something apparently knocked up in just 16 hours).

The project authors believe that some simple modifications – such as employing a curved mirror to allow the camera to monitor the entire screen, and using a higher resolution webcam (the test model was only 480p) – would allow for the development of a ‘practical low-cost touchscreen’ solution for the Mac.

This, or a similar DIY system – there are third-party solutions out there along these lines, although not nearly this cheap – might just be the only way you’ll ever get a touchscreen for your Mac, as Apple has made it fairly clear in the past that this isn’t a route it’s likely to pursue.

That said, we may see a future MacBook which replaces the keyboard base with what would effectively be a second touch display, or a virtual OLED keyboard, which could be hugely flexible in terms of being able to turn into any layout you can think of (so, for example, it could become a big sketchpad, or have custom controls for a game).

Right now, that concept has only shown up as a patent, though, and as we know, that doesn’t necessarily mean it will ever see the light of day as a manufactured product.