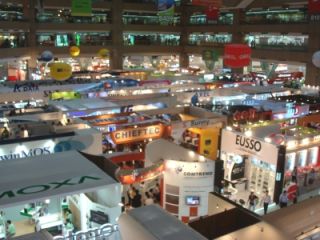 Computex is on all week at Taipei's World Trade Centre

PC Format writer Dave James is out at Computex in Taipei, and he's sending back tales of his tech (and non-tech) experiences to the PC Format blog . Today he meets up with case and power supply manufacturer Antec as well as peripheral gurus Genius.

Dave's meeting with Antec's Scott Richards proved most enlightening. "It's always the second day that's the killer," said Richards. Genius showed off the first ever mouse in the world with the optical sensor pointing directly up into the ceiling. It's a secondary laser that emulates the scroll wheel by tracking the movement of your finger. Clever stuff.

Elsewhere Dave checks out DDR3, Abit's motherboards and booth babes on Segways. What more can you ask of him? Read on .