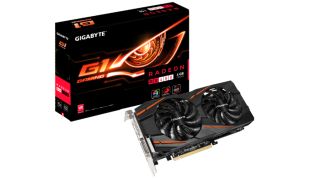 The card comes in two variants, with 4GB and 8GB of video RAM on board, but otherwise they are identical.

Gigabyte didn't talk clock speeds in the information it released to the press, but the company did big-up its custom cooling solution.

It has bolted a WindForce 2X cooler onto the card, which consists of a pair of 90mm fans with specially crafted blades that increase their cooling capacity by 23%, according to Gigabyte.

Those are augmented by three copper heat pipes which are in direct contact with the GPU, again to help with efficient cooling. This is a similar system to the one Asus offers with its rival ROG Strix RX 480, except that uses three fans rather than two.

As well as cooling, the WindForce 2X solution is also quiet, and indeed the fans don't spin at all when the PC is idling or only subject to low loads such as light gaming, so all you get is a golden silence coming from the RX 480 G1 Gaming. Gigabyte has even incorporated an indicator to show the status of the fans.

You also get RGB lighting with 16.8 million customizable colors and various effects to add some glitz to your PC case.

And Gigabyte has its Xtreme Engine utility on hand to manage those lighting effects along with overclocking, with a one-click OC Mode button for an easy way to juice up your graphics card's performance.

Naturally, we've reviewed the Radeon RX 480, and you can peruse our thoughts on AMD's mid-range wonder here.