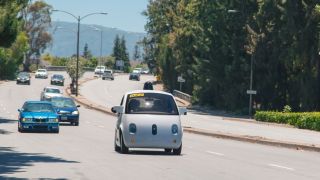 Sit back and enjoy the ride, the days of steering a car from point A to point B may soon come to a close: Google's self-driving cars have officially made their way onto the roads of Mountain View, California.

But don't freak out yet. The autonomous vehicles, which share an eerily similar visage to a koala, will be making the rounds at a "neighborhood-friendly 25mph," and come equipped with a removeable steering wheel, gas pedal and brake, just in case something goes wrong.

We've known this was coming for awhile. Google announced the development of the cars a little over a year ago and they got the green-light for these tests about a month ago. That said, we haven't heard of the cars leaving the test track until today and are nothing but excited to see how they fare on the open road.

It's not as bold of an experiment as it sounds, however. Google's autonomous vehicles will use the same software that's found in the Lexus smart cars that have been roaming around the streets for some time, so the chance for something to go awry are slim to none.

Google is asking anyone who sees the driverless cars in action to submit feedback via its website.