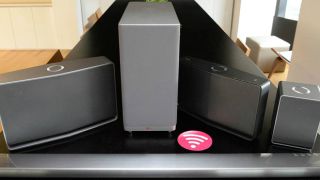 LG has announced Music Flow, a new streaming speaker system that arrives with Sonos in its sights.

The system, which is made of speakers, a sound bar and a network bridge, is controlled with the companion Music Flow Player app. It'll also work with streaming services such as Spotify, Deezer and Napster.

But unlike rivals, LG isn't relying on Wi-Fi or Bluetooth to tether the various limbs of its system together. Instead it uses a mesh network technology, paired with dual-band WiFi, to hopefully ensure that those tunes are uninterrupted. NFC connectivity is included too, handily.

LG's Auto Music app will also work as a music player when you're out of the house, with music switching straight to your home speakers the moment you walk in the door thanks to the Auto Music Play feature.

All in all, it's a similar setup to that of Sonos, which currently has the Play:1, Play:2 and Play:5 multi-room speakers, as well as a soundbar.

But will LG do it better? We'll have to wait until we can get our ears on it to find out.

The Music Flow system will be made available to the UK later this month, with a global rollout to follow after.