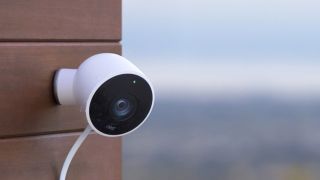 Brace yourselves for a brand new Nest Cam Outdoor: a filing for just such a device has turned up at the Federal Communications Commission (FCC) in the US, suggesting a launch is on the way in the near future.

Unfortunately we can't glean too much about the security camera from the filing alone. It has the same model number but a new ID number compared with the last model, suggesting a minor refresh.

Just a few weeks ago a filing for an updated Nest Cam Indoor was also spotted at the FCC, so it's possible that Google plans to release new versions of both the indoor and outdoor cameras at the same time.

These are the basic models in the Nest Cam line-up – not the more advanced IQ models that feature better quality video and more advanced features (like person detection).

Google has recently been going on something of a rebranding exercise when it comes to its smart home department, changing its Google Home Hub speakers into Google Nest Hubs.

These cameras don't need the same rebranding, but could possibly come with new features that improve the integration between devices under the Nest banner.

Whatever Google has in the pipeline, there's no doubt the home security camera market is more crowded than ever before – these Nest Cams are up against competing products from the likes of Hive, Arlo, and two different brands from Amazon.

Based on the filing though, it doesn't look like the new model will be the first Nest Cam to go wireless – the diagrams attached to the filing still has a USB cable and power source permanently attached.