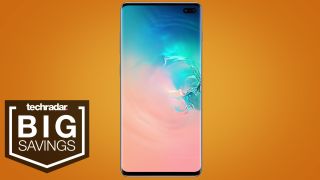 There are a variety of Samsung Galaxy S10 Black Friday  deals available today, and it just so happens that Samsung's new S phones are among the most popular Android devices this holiday season.

It doesn't get much better than the Samsung Galaxy S10 Plus price drop to $799 – it cost $999 before Black Friday, and it remains our best phone pick for 2019 (that hasn't changed in the eight months since it launched).

With a 6.4-inch QHD display, you won't find a bigger Samsung phone at a better price. It also comes with a free pair of wireless Samsung Galaxy Buds.

What can make that deal even better? There are no strings attached. This is an unlocked Samsung Galaxy S10, which means it isn't linked to any carrier contract, nor any longer-term payment plan. This is a straightforward discount on the phone, and it's an unlocked model that you can take to whatever carrier you want. That means you can pick whatever unlimited data plan suits you.

If your budget is a little tighter, or your pocket is just a little smaller, you can also pick up the standard Galaxy S10 for $699. The price and phone are the only differences here, as you'll still get a free pair of Galaxy Buds and an unlocked model.

Samsung Galaxy S10 Plus at Amazon| SIM-free | $799.99
This is the very best phone you can buy in 2019, and it's now $200 cheaper if you're planning to buy it outright in one go. On top of that, you'll also get yourself a free pair of Samsung Galaxy Buds headphones that normally cost $129.99.View Deal

Samsung Galaxy S10 at Amazon| SIM-free | $699.99
Want a smaller phone than the Galaxy S10 Plus? You can get the Galaxy S10 that sports similar spec in a smaller package but costs $100 less in this Amazon Black Friday deal. Use the link above and you'll get yourself a pair of Galaxy Buds headphones, and this is for the 128GB version of the phone.View Deal

Unfortunately, there's no matching deal on the Galaxy S10 5G. But, if you want to go even lower still, you can also score the Galaxy S10e for $200 off, which brings it down to $549. This version doesn't come with a pair of Galaxy Buds though, but it's still unlocked from Amazon.

If you opt to activate the phone with a carrier today, you can get an even bigger discount from Best Buy. There, you'll be able to pay just $449. If you head to the store and decide you don't want to activate today after all, you can still get the $549 price from Best Buy.

Here are those Galaxy S10e deals:

Samsung Galaxy S10e: at Amazon | Unlocked |  $549.99
You can take this Galaxy S10e to whichever carrier you want, and spend the money you've saved on an extra capable data plan.
View Deal

Samsung Galaxy S10e: at Best Buy | Unlocked |  $449.99
The Galaxy S10e is the most affordable way to get a Galaxy S10 handset, and for Best Buy's Black Friday sale, it's now even more affordable thanks to a huge $300 off if you activate it today. This comes with a 5.8-inch display and 16MP camera.
View Deal

Not in the US? You can still find Samsung Galaxy S10 Plus deals below but they may not come with the free Galaxy Buds.