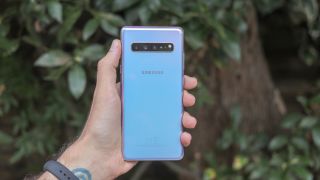 It’s arguably getting harder and harder for flagship phones to innovate and stand out now that they’re all so feature-packed, but one new feature Samsung might be hoping could help is a spectrometer.

A spectrometer is a device that can use an infrared beam to analyze the energy waves of an object and potentially determine its chemical composition.

While we’re not sure how much use the average person would have for such a thing, it could provide an interesting insight into the world around us, and Samsung has applied to patent an ‘electronic device’ with one built in.

Said device looks a lot like a phone going by the patent images, spotted by LetsGoDigital. Of course, patents don’t always turn into commercial devices and can sometimes take a long time to go from patent to product even when they do. So we wouldn’t count on seeing a spectrometer in the Samsung Galaxy S11 or Samsung Galaxy Note 11.

But it’s certainly possible that one or both of those phones, or that some other Samsung phone, could include the feature, as it in all likelihood would be something rivals won’t initially offer, giving Samsung’s phones a new USP.

So far we haven’t heard a whole lot else about the Samsung Galaxy S11 beyond the fact that it’s sure to be very powerful, but we’ll be sure to update you with every credible rumor.