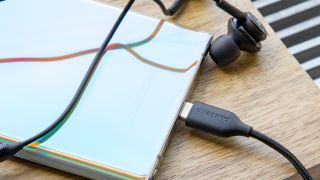 Phones with high-tech specs need impressive batteries to keep them ticking, and that looks set to be the case in the upcoming Samsung Galaxy S11, as it looks set to have a huge battery capacity.

That's judging by an alleged photo of the battery itself, posted by certification company SafetyKorea on its website, which shows the capacity as 4,500mAh.

That battery capacity puts the Samsung Galaxy S11 alongside the Galaxy Note 10 Plus, which also has that size power pack, though as the 'plus-sized' of two devices the Note likely has a bigger screen, and therefore likely shorter battery life, than the Galaxy S11.

We haven't heard many rumors about the Galaxy S11's battery size, although a prior leak stated the Galaxy S11 Plus as having a whopping 5,000mAh power pack, which is definitely on the big side.

Most flagship smartphones have battery capacities that hover between 3,000mAh and 4,000mAh, and indeed the Galaxy S10 battery had a 3,400mAh capacity, so if 4,500mAh is the correct figure, it seems the Galaxy S11 could have great battery life.

Or, more likely, the phone will have almost exactly the same life as the S10. Since the Galaxy S11 is expected to have loads of high-end features like a 120Hz refresh rate in the screen, a 108MP camera, and new facial unlocking features, the new power pack might only succeed in compensating for the various new battery drains, instead of adding any extra use time over previous devices.

We'll know for sure come February 2020, when we're expecting the new smartphone to debut, but stay tuned to TechRadar in the run-up for all the latest Samsung news and rumors.