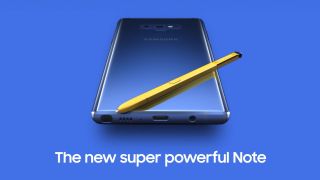 We now know almost everything there is to know about the Samsung Galaxy Note 9, but a new leaked video directly from Samsung may have just spoiled the final secret - the storage.

The news is it'll come in a 512GB version as well as 512GB of microSD storage. That'll make it one of the first phones you can buy that can offer 1TB of storage.

This all comes from a leaked video from Samsung's New Zealand account, which accidentally published an official pre-order advert for the upcoming phone. The video has since been pulled.

Much of what we've seen about the phone is already here with the shots showing the yellow S Pen with the blue version of the phone. It comes in a bold new yellow shade and Samsung is calling it "all new powerful S Pen".

It also states it has an all day battery, but we don't know the official size of the cell and that's something Samsung often says about its devices.

We know so much

This is the first time we've heard about the 512GB version of the phone and it clearly states you'll be able to put a top size microSD card into it to up the storage to 1TB.

This won't be the only version of the phone - the advert says in the small print "for 512GB models", suggesting there will be other models with less storage. We're not currently sure if that'll be 64GB or 256GB models.

Not much else is shown in the advert apart from the design of the phone, which you can see above, or you can watch the video that's hosted on SamMobile.

The launch event for the Samsung Galaxy Note 9 is set for next week with a big announcement taking place in New York on August 9.

Hopefully there will still be one or two surprises from the company at the official launch, but the fact we've now seen leaked official adverts showing its key features doesn't bode well.