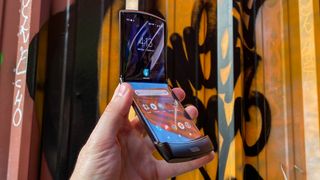 The Samsung Galaxy Fold 2 is set to be the world's second clamshell foldable phone, after the Motorola Razr from late 2019, but a new specs leak suggests this newer device could have a few more top-end features than the Razr.

This information comes from leaker Max Weinbach, who's been frantically posting Galaxy Fold 2 and Galaxy S20 information for days now. Since the phones aren't out yet, all this information could prove to be totally wrong, and Weinbach doesn't have a totally perfect track record, so take it with a pinch of salt.

It's worth also pointing out that Weinbach refers to the device as the Samsung Galaxy Z Flip, which is a name several leakers are using to refer to the device.

For now, we're still using the moniker Galaxy Fold 2, since it's a foldable phone that succeeds the original Galaxy Fold, and also because 'Galaxy Z Flip' seems a bit of a stupid name.

Now, let's look at some of the features Weinbach suggests will come in the Samsung Galaxy Fold 2 or Galaxy Z Flip, and how it compares to the Motorola Razr.

In terms of design, Weinbach suggests the Samsung Galaxy Fold 2 will have a side-mounted fingerprint sensor, a feature few Samsung phones (other than the Galaxy S10e) have had.

The Motorola Razr had a front-mounted scanner in a physical button, and neither placement is exactly preferable to the other, as which is better is more dependent on your personal preference than anything else.

So Galaxy Z Flip. Capacitive fingerprint scanner on the side. Dual 12MP cameras, wide and ultra wide. 15W charging. Wireless charging and reverse wireless charging are supported. It will use "Samsung Ultra Thin Glass" which has crease. It will use a Dynamic AMOLED display.January 23, 2020

The display is said to be a Dynamic AMOLED panel made of 'Samsung Ultra Thin Glass', which by the sounds of it will display decent-looking pictures without being so thick it makes the folded phone unwieldy.

The Motorola Razr has a P-OLED screen, made of plastic so it can fold tight without being too thick – we'll have to see which is better when we get hands-on with the Samsung device.

While we're not sure many would want to charge their heavy smartphone on a dainty foldable phone, it could be useful for people with compatible wearables or wireless earbuds.

The Samsung Galaxy Fold 2 cameras include, Weinbach states, a 12MP main sensor and a 12MP ultra wide-angle camera, and the versatility of this second camera could make the snappers better than the single 16MP Motorola Razr camera (which was joined by a 3D Time-of-Flight sensor, though we're not convinced of the usefulness of ToF sensors).

In a separate tweet, Weinbach, said the phone will have a Snapdragon 855 Plus chipset, the most advanced chipset available as of writing, which puts it a step above the Motorola Razr's mid-range Snapdragon 710.

So if the Samsung Galaxy Fold 2, or Galaxy Z Flip, comes out with these specs, will it be a Motorola Razr killer? Well, not definitely.

Firstly, we don't know the price – the Razr, with its mid-range components, could prove to be more affordable than the Samsung foldable.

Secondly, the Motorola Razr is a pretty good-looking phone, with a mix of nostalgia to the original Razr phones and novelty at it being the first smartphone with such a form factor. Our initial leaked images of the Samsung Galaxy Fold 2 make it look a little plain in comparison.

To really compare the phones in any detail, though, we'll need to see the upcoming handset in the flesh (well, in the plastic or glass or aluminum or whatever it's made of). The Samsung Galaxy Fold 2 is expected to be announced at Samsung Unpacked on February 11, and TechRadar will be on the ground reporting to bring you the latest news.