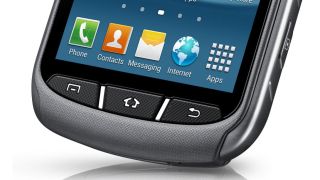 The Samsung Galaxy Xcover 2 UK release date has been confirmed...and guess what! It's in March.

As you'd expect from tough phones these days the Xcover 2 is dust- and sand-proof while also being water resistant – and it will happily sit in fresh water for up to 30 minutes at a time.

There's an additional cover lock which helps protects the Samsung Galaxy Xcover 2 from drops and a physical camera key allows you to take photos underwater.

The tough get going

The Samsung Galaxy Xcover 2 also comes running Android Jelly Bean out of the box, although it's only version 4.1.

TechRadar spoke to Samsung but the manufacturer isn't revealing the exact day the phone will go on sale, or price of the Xcover 2 just yet.

The handset will more than likely be knocking around at MWC 2013 in Barcelona and TechRadar will be present to bring you a hands on Samsung Galaxy Xcover 2 review.