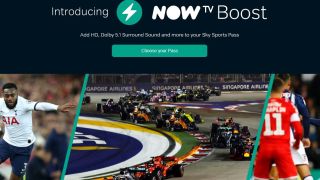 Two years of teasing and Now finally did it - in case you haven't heard, you can now stream (most of) your favourite Now TV content in HD.

It's all thanks to the streaming platform's Now TV Boost bolt-on, which you can add to your Sky Cinema, Entertainment, Sky Sports, or Kids Pass.

This does come at an extra cost however, as you'll have to pay an extra £3 on top of your selected pass - meaning that if you're paying £8.99 for your Entertainment pass, the HD quality would push your total to £11.99 a month.

But given that Now TV allows you to get a free trial of its passes (apart from the Sky Sports) though and the Boost upgrade comes with a free trial, too - you could always just try it and then cancel to see what it's like.

Now TV Boost | £3 a month
This is ideal for anyone who wants to access Sky TV channels without committing to a long and annoying contract or subscription and you don't want to compromise on the quality of your picture. That means your choice of world class sport, a new movie premiere every day and some of the most brilliant box sets out there now in 1080p.
View Deal

Is the Now TV Boost any good?

While we've been waiting to see 1080p streaming on Now TV for quite some time now and are certainly happy it has now arrived, there are some caveats to be aware of. For starters, it doesn't feel like terrific value for money as your channel options are limited (see below) and you could get Netflix in HD for just £8.99 a month or Amazon Prime Video in HD (which is included in Amazon Prime) which will only cost you £7.99 a month.

The feature is only available on Sky Sports channels, Entertainment except Fox and Gold, all Sky Cinema channels and all kids channels except for Cartoonito and Nickelodeon. So Hayu isn't included in there, if reality TV is your thing.

And if you're somebody who does more watching on your mobile or tablet than your TV, we're afraid to say that Now TV's mobile app isn't included in the list of supported devices. So you'll be stuck with plain old 720p.

"The lack of Full HD 1080p streaming has been something of an embarrassment for Now TV for years now (Game of Thrones looked awful), so it's great to see HD finally being added," said Brendan Griffiths, Managing Editor of Games and Hardware at our sister-site GamesRadar

"But it not being a free upgrade though is a real slap in the face for subscribers. Now TV's individual streaming subs were already amongst the most expensive in the UK and came with some of the smallest libraries of content too. Disney Plus will be offering HD and 4K for one cheap price in the UK soon and Now TV will likely be the first sub most viewers will drop over Netflix and Amazon Prime."