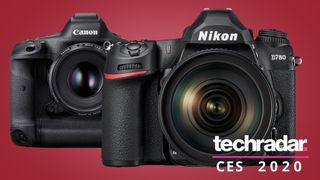 CES 2020 is a celebration of often crazy innovations like Chef Bots and rotating TVs, so why has a seemingly ancient technology like the DSLR been the camera story of this year's show?

With the Canon 1DX Mark III and Nikon D780 the big photographic stories this year, you'd be forgiven for thinking it's CES 2010, not a decade on from the DSLR's heyday. So are camera manufacturers simply closing their eyes and wishing that mirrorless tech and smartphones hadn't happened? Or are there more positive reasons for the DSLR's apparent comeback?

The good news for photographers who prefer optical viewfinders to EVFs (which is the main difference between DSLRs and mirrorless cameras) is that it's more likely to do with the latter. Along with a few less interesting factors like product life cycles and trade show decline.

As Mark Twain once said, reports of the DSLR's death have been greatly exaggerated. While mirrorless is undoubtedly the future, many people have collections of lenses that are designed for older mounts (like Canon EF and Nikon FX/DX) that were first popularized by DSLR bodies. They've also honed their craft on cameras with a certain feel (optical viewfinder, large grip and satisfying mirror 'thunk') that you simply can't get on most mirrorless cameras.

So Canon and Nikon have done the entirely sensible thing at CES 2020 – they've released new DSLR bodies that combine a comfortably familiar experience with the benefits of mirrorless shooting, like superior AF coverage and video powers. In other words, they've made DSLR-mirrorless hybrids.

Best of both worlds?

Let's be clear: the Canon 1DX Mark III and Nikon D780 are two very different examples of the DSLR-mirrorless hybrid. The former is a £6,500 professional sports camera that's well beyond the average photographer, while Nikon's successor to the D750 is an altogether more subtle, tempting twist on the DSLR formula. But both show that the manufacturers with DSLR heritage do feel there's still enough pent-up demand for cameras that meld optical viewfinders with the latest mirrorless tech.

The Nikon D780 is, in particular, a good example of the kind of DSLR-mirrorless hybrid that could do well in the next few years. It succeeds (but doesn't replace) a very popular DSLR, the Nikon D750, that fans had been keen to see upgraded with features like improved autofocus, a touchscreen and 4K video recording. And it sits alongside Nikon Z6, which is currently number one in our list of the best cameras in the world, as a tempting option for those who fancy dabbling with mirrorless tech, but don't want to give up their DSLR's optical viewfinder, battery life or native lenses.

Naturally, hybrids like the D780 can't quite offer the best of both worlds. DSLRs can adopt many mirrorless talents, like silent shooting in Live View, which is a real boon for situations like weddings or quiet sports events. But the fundamentals of a travel-friendly form factor and electronic viewfinder, which previews your photo's exposure and color profile before you take it, remain the preserve of the new mirrorless breed. The all-digital shooting style is also way more intuitive for those who are stepping up from smartphones rather than dusty old DSLRs.

While the apparent DSLR comeback at CES 2020 might sound like a positive thing for camera fans who want choice, there are a few big qualifications. DSLR sales have been plummeting harder than mirrorless cameras in the last year, so the launch could be interpreted as a final throw of the dice to lure existing owners, who might feel they already have their 'forever camera', into one final purchase. In fact, you could argue that launching cameras like the D780 is an unwelcome distraction for Nikon, when it should be focusing all of its attention of the mirrorless Z Series, something it was very late to introduce.

Talking of lenses, the other issue is the potential lack of new glass for the DSLR-mirrorless hybrids. While the number of legacy EF and FX lenses is a possible strength for Canon and Nikon, there is the added issue that older lenses aren't equipped to take full advantage of new mirrorless features like Live View autofocus with Eye AF. This is something that Canon admitted to us when explaining why the 1DX Mark III is a DSLR rather than a mirrorless camera. And with both companies very much committed to developing their new RF and Z-Mount lens line-ups, new glass for DSLR-mirrorless hybrids isn't exactly top of the priority list.

Lastly, the arrival of the Canon 1DX Mark III and Nikon D780 at a trade show like CES 2020 might also be seen as a symptom of the diminished standing of both DSLRs and the show itself. These days, the biggest cameras, just like all consumer tech, get their own launch events. So is their unveiling at a generalist tech show a sign that DSLRs or CES are becoming less relevant? Probably a bit of both.

Still, whatever the symbolism of the DSLR's apparent comeback at CES 2020, camera fans will, in the short term at least, get some extra choice in the form of new 'hybrid' bodies that offer a halfway house between the two main flavors of camera. And that can only be a good thing for those looking to upgrade this year.