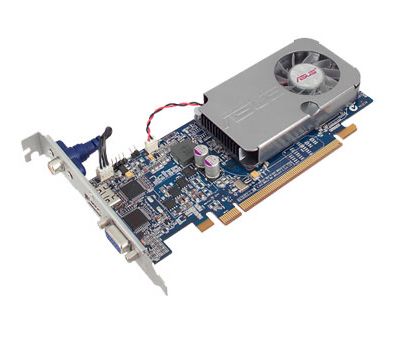 With an HDMI port and S/PDIF input it everything you need for a HTPC.

A pedestrian performer, but extremely compact and ready for HD action

By many metrics, this card a pretty mediocre performer. Under load during 3D rendering, it's a whiny little beast. And that's despite its modest gaming grunt. You can forget playing recent games at 720p with the image quality set anywhere near maximum. Even Half-Life 2: Episode One with HDR disabled and no anti-aliasing was nearly more than it could cope with.

And while we're slipping the knife in, it would be remiss not to point out that the EAX1600 Pro's hardware video decode performance was less than stellar. It only shaved off 13 per cent, in terms of CPU utilisation, compared with a software-only solution.

All of which will leave you wondering what exactly the EAX1600 Pro actually has going for it. For starters, it's the most compact card on test, a proper half height board that comes complete with a pair of backing plates and should fit into almost any system. What's more, with core and memory clockspeeds of just 400MHz and 800MHz respectively, it won't stress out your system's PSU.

It's also the real HDCP deal thanks to an HDMI port. But what really separates this graphics card from the rest of the pixel-pushers in this test is its SPDIF-in port. It enables users to directly connect the SPDIF-out port from their PC for a simple solution to the problem of enabling a full audio-visual stream. Jeremy Laird