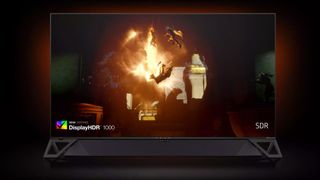 Las Vegas is all about excess, and so it’s fitting then that the displays and TVs on show at CES 2019 have been as extravagant as the strip itself. Whether it’s a rollable TV or a giant 8K screen, the future of televisions (despite the stellar visual work being done with the Panasonic GZ2000 4K OLED) seems to be all about insane party tricks and forward-thinking but a little pointless for the time being resolution bumps.

So, if no holds are barred for the battle for the living room of tomorrow… how about replacing your television with a gigantic, and slightly insane, computer monitor?

That’s what HP is hoping you’ll be doing with the HP Omen X Emperium, a monitor as lustworthy as it is ridiculous. Could it earn pride of place in your living room? Given its spec sheet, maybe it should.

A play for your living room

First though, a little backstory. This time last year at CES 2018, Nvidia announced its “Big F**king Gaming Display” (BFGD) project. The idea was to put the finest elements of a gaming monitor, like the company’s G-Sync adaptive frame rate technology and HDR panels, into giant, feature rich screens from its closest third party partners, and aim them directly at the living room.

But that’s pocket change for true cinephiles looking at top of the range television sets. And while it’s unorthodox, there’s enough here to perhaps tempt them away from the LG, Samsung and Sony stalwarts of the home cinema.

Everything but the kitchen sink

So, apart from 65-inches of screen, what does that price tag bag you?

First the display. A crisp, Quantum Dot HDR panel, it offers up to 1,000 nits of brightness and a deep contrast ratio of 4000:1. Equipped with G-sync HDR, it can actively sync its high 144Hz refresh rate with an Nvidia PC graphics card, making any desktop computer gaming you hook up to the screen look silky smooth.

Next up, audio. There’s an included soundbar in here, pumping out a stonking 120 watts of output. Sure, you can hook up a discrete unit and some satellite speakers through an amp if you’d like, but it won’t be a necessity like you’d find with many conventional flatscreen TVs.

Then onto, the ports – you’ve got a Display Port 1.4 for hooking up a G-Sync compatible computer, three HDMI 2.0 ports with support for the HDCP protocol, two USB 3.0 ports and two USB charging ports. In terms of audio options, you get line out, one S-PDIF out and another HDMI port supporting ARC audio control.

That may be a little stingy for a living room set-up, especially with a screen as gaming-orientated as this one. You’re going to want to hook up your PlayStation 4 Pro, Xbox One X and Nintendo Switch, as well as set top box and 4K Blu-Ray player right? If you’ve got the money to drop money on a screen like this, we’re guessing you’ve got a full house of entertainment gear in your living room.

But at least one port will be spared, as you’ll have no need to plug in what we here at TechRadar consider a living room essential – an Nvidia Shield console. That’s because Nvidia’s dinky-but-powerful machine comes built into the HP Omen X Emperium, making it out of the box the best smart TV you can get.

Built on the Android TV platform (and being the best execution of it we’ve seen) Shield is fully equipped for gaming, whether that be taking advantage of the ample options offered up from the Android gaming store, or making use of the Shield’s AAA cloud and PC game streaming options. That’s before you consider the other entertainment options and apps it can take advantage of, whether they be the 4K HDR enabled versions of Amazon Prime Video or Netflix, media server offerings from Kodi and Plex, or music streaming from Spotify among many others. And did we mention it’s got a voice assistant built included in the shape of Google Assistant, meaning it can also be a hub for smart home controls? Well, it does.

It’s hard to imagine cinephiles being enamoured with the OTT industrial design of the Omen Emperium, but it’s hard to argue against the spec sheet here, and from our hands-on time with the product, it lives up to the promise of its feature list. And it sure as hell is in keeping with the spirit of that ‘Big F**king Gaming Display’ project name.

The HP Omen Emperium hits stores in February 2019. Check the link below for the TechRadar computing team’s early hands-on verdict.