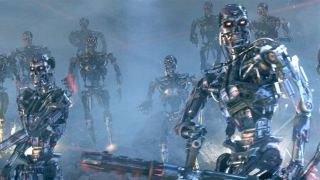 One of Isaac Asimov's most thought-provoking sci-fi stories, The Last Question, concerns humanity's relationship with an ever-evolving AI spanning millions of years. Online, someone replaced the AI's name with the word "Google," and this version of the story makes even more sense.

Now, based on a recent Google patent, it seems we ought to do the same search-and-replace with Terminator's "Skynet," just to see how the future might look.

The search company - which has long dabbled in areas other than internet queries - has patented a system for "allocating tasks to a plurality of robotic devices." As business news outlet Quartz points out, that may not be as innocuous as it sounds.

In Google's patents, multiple robots could be controlled from a central device - like a smartphone or computer - from anywhere in the world. And there's no stated limit to how many robots this might include.

As the site points out, there are legitimate applications for this, like letting all of Google's self-driving cars communicate. But self-driving cars won't do us any good when Google goes sentient and wages war on all humanity as retaliation for all the times we made it search for "Kim Kardashian's butt."

Just don't say we didn't warn you when it does.