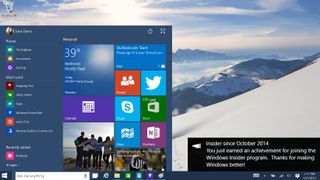 Because putting up with Windows 8 wasn't enough of an achievement in itself, Microsoft has baked Xbox-style achievements into Windows 10.

As noted by Neowin, the latest build of Windows (10056) gives you a virtual back clap for undertaking certain tasks by displaying an on-screen notification message in the bottom-right hand corner. Because well done you.

Opening the Windows Insider program hub, which keeps Windows 10 preview users up to date, has been uncovered as one of the first achievements.

We're hoping for some edge-of-your-seat Achievements action when Windows 10 lands later this year. Microsoft, if you're listening, allowing us to unlock the following only makes sense:

Our lives are waiting to be changed, guys.