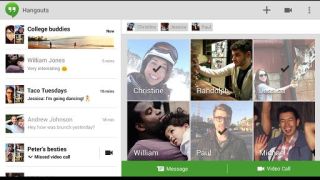 Hangouts rolled out at I/O yesterday

While, to our surprise, there was no mention of SMS support for Hangouts during Google's I/O conference yesterday, it seems that we probably shouldn't have read too much into the absence.

Some details in the Google Play store have alluded to SMS support being very much available on Hangouts in the future.

The information, found within the list of permissions for Hangout on Android, flags up some pretty explicit hints under the "Your messages" section.

The permissions include a request to "Read your text messages (SMS or MMS)" and another to "Send SMS messages". Pretty straightforward stuff, really.

Let it all hang out

The current Android app doesn't seem to include these features, but the fact these permissions are already being detailed is good news for those still holding out for some SMS love.

Of course, such integration could pose a threat to iMessage, which is currently only available for iOS, while Hangouts is cross-platform.

Whether the omission in the initial Hangouts rollout is due to Google still developing the support or just deciding against it is unclear for now.

Oh, and turns out we were right about Hangouts after all.