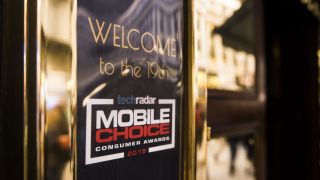 TechRadar has named the Samsung Galaxy S10 Plus its 'Smartphone of the Year' at the Mobile Choice Consumer Awards 2019 ceremony in London.

Samsung's flagship phone took home the biggest award of the night against stiff competition from Google, Huawei, Apple and OnePlus.

The TechRadar Mobile Choice Consumer Awards are a celebration of the UK mobile industry as a whole where we look at the best hardware and networks from the last 12 months.

The awards were judged by the public with over 34,000 entries this year combined with the opinions of our panel of expert judges to create a list of the very best in the mobile space.

Samsung didn't just walk away with best smartphone as it also won 'Smartphone Manufacturer of the Year' and 'Best Wearable' for the Samsung Galaxy Watch.

When it comes to networks, Three was the most prolific winner taking away 'Best Network for Data', 'Best Network for Roaming' and 'Best Value Network'. It also won 'TechRadar's Deal of the Year' for its £20 SIM Only deal that offered unlimited internet for a phenomenal price.

The accolade of 'Best Network' went to EE, which also won the 'Best Customer Care' award.

Our inaugural 'Best Quad-Play Provider' award - that's for a company that offers broadband, TV, home phone and a mobile contract in one package - went to Sky.

And, finally, our 'One To Watch' award which highlights companies that we're anticipating big things from in the next 12 months went to TCL for its exciting innovations in the foldable smartphone space.

The awards took place at Cafe De Paris in London with representatives from the major manufacturers and networks turning out in force to celebrate the last 12 months.

Gareth Beavis, Editor in Chief of TechRadar and awards host said, "This year's move to Cafe de Paris felt like a brilliant move for the TechRadar MCCAs, with a closer venue allowing for more atmosphere in the room.

"Samsung was pleased to reclaim its crown as one of the most decorated manufacturers, and it looks like 2020 is going to be an even bigger year for the brand too - bring on the 20th anniversary of the awards!"