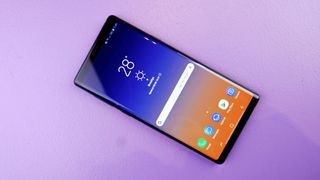 We may have just had our closest and clearest look yet at the possible design of the Samsung Galaxy Note 10, as renders have been shared that seemingly show the phone from all sides.

Shared by the usually reliable leaker @OnLeaks on behalf of 91mobiles, the renders show a single-lens punch-hole camera in the top center of the apparently 6.3-inch screen, with hardly any bezels above or below the display.

The screen is curved, as you’d expect from a Galaxy Note, and on the back there are three cameras running down the left edge. There’s no visible fingerprint scanner, suggesting that – again, unsurprisingly – it’s built into the screen, and according to the source the Note 10 likely has a 1440 x 3040 resolution and HDR10+ support.

There’s no sign of a headphone jack or a Bixby button, but there are some buttons, which one questionable rumor suggested there might not be – though it’s possible that this ‘feature’ would be reserved for the rumored Samsung Galaxy Note 10 Pro.

Finally, the source says to expect a Snapdragon 855 or Exynos 9820 chipset, depending on region, and up to 12GB of RAM.

We’d take these images and the accompanying information with a pinch of salt though. Not just because it’s unofficial, but also because there are some questionable aspects to it.

The positioning of the cameras differs not just from the Note 9, but also from the Samsung Galaxy S10 range, which seems odd, as does a 6.3-inch screen, given that the Note 9 has a 6.4-inch one.

The rumored dimensions seem strange too, since they would make the Galaxy Note 10 longer and wider despite the apparently smaller screen and seemingly less bezel. All that, and there’s arguably a slight lack of polish to the design shown here too.

This rendering is a small size Note10, a ToF camera will be added to the back of the large Note10 Pro. pic.twitter.com/Ol6ZiOBZMTJune 6, 2019

Having said all that, the source as noted is usually reliable, and @UniverseIce (another reliable leaker) has since tweeted that this design is accurate, adding that the Note 10 Pro will look similar but with an extra lens for depth-sensing on the back.

So this design very possibly is accurate, but we won’t know for sure until the Samsung Galaxy Note 10 is announced, likely in August.