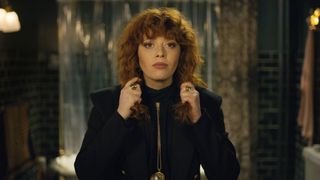 Even if you spend a lot of time on Netflix, you may not have got around to watching the Netflix-produced Russian Doll yet: a time-bending drama set in modern Brooklyn which landed on the streaming service earlier this year.

In fact, unless Netflix's recommendations system listed it as relevant to your interests and brought it to your home page, you may not have discovered it at all. But its that same algorithm that Russian Doll star Natasha Lyonne has to thank for the show's success.

On a panel at Recode's Code Conference, Lyonne – who plays the foul-mouthed video game designer Nadia Vulvokov – spoke about the future of Russian Doll with Netflix's VP of content acquisition, Cindy Holland. Suffice to say, it's getting a second season.

Holland announced that Netflix had renewed the show – with Lyonne calling the follow-up season the "same show, but weirder" – lining up with comments Lyonne had made previously regarding plans for a three-season arc.

What's interesting is that Lyonne specifically thanked the Netflix algorithm for putting the – admittedly oddball – television drama in front of the right eyes. She said that she took "a bit of relief in the algorithm", as it meant the show was able to target those she knew would be interested in the show's quirkier themes, rather than catering for a broader or more mainstream audience.

Lyonne cited the "boundaries" around the audience that afforded, and that it was "sort of healthy for the creative process, in a way."

For those who've seen the show, you can tell that focus paid off: Russian Doll is unashamedly odd, continually taking the story in unexpected directions, while sticking to snappy 30-minute episodes perfect for the Netflix platform.

Putting a modern, darker spin on the Groundhog Day formula – where someone is forced to relive the same day over and over again – and exploring everything from religious faith and multiverse theory to the nature of video game design, it's clear that this online fragmentation of viewing tastes is creating some truly original television.

Let's just hope that algorithm keeps doing its job, so those of us wanting more like Russian Doll don't have to miss out.