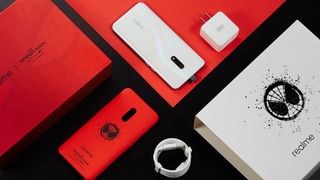 Realme Mobiles has showcased its Realme X Spider-Man edition for India ahead of the release of Spider-Man: Far From Home on Friday. It's not uncommon for smartphones manufacturers to partner with pop-culture icons and is something we have previously seen from companies like OnePlus, Xiaomi, and Oppo. Realme is just another addition to this list with its upcoming Realme X which will launch on July 15.

Realme X was announced on May 15 at an event in China, and Realme CEO Madhav Sheth had hinted that it was going to be priced around ₹18,000-mark.

There doesn't seem to be any cosmetic change to the Realme X for the Spider-Man edition. The Realme X Spider-Man Far From Home Gift Box is clad in red and white color with two different Spider-Man symbol on the cover of the box. Inside the box, we get the Realme X, VOOC 3.0 adapter, Spider-Man case, and a sim-eject pin.

The phone included in the box is the Steam White variant though we're not sure if the blue color will also be available. Switching on the phone, its greets users by a custom Spider-Man theme including wallpaper and icon packs.

Other than these changes, let's take a look at the specifications of the Realme X.

It is powered by Qualcomm Snapdragon 710 chipset with an octa-core CPU and Adreno 616 as the graphics processor. This is paired with different RAM and storage configurations- 4GB RAM + 64GB, 4GB + 64GB or 8GB + 128GB storage. It runs on Android 9.0 Pie based ColourOS 6.

The phone has a dual camera setup which consists of a primary 48MP sensor with an f/1.7 aperture and a secondary 5MP depth sensor. The pop-up module houses a 16MP selfie camera with an f/2.0 aperture.

While we do not know the prices yet, Realme has revealed that the Realme X will be the"most affordable premium smartphone," though we'd take that with a grain of salt.