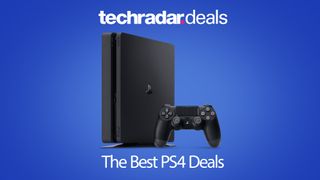 Finding the best PS4 sales can be a difficult task, but we're here to help you find all the latest deals from a range of retailers. Whether you're looking for a PlayStation 4 bundle or a powerful PS4 Pro, we've listed both Sony console deals below from top retailers such as Walmart and Amazon (we've listed the best prices at UK retailers too). While the savings might not be significant, PS4 consoles rarely go on sale, so even the smallest discounts are worth mentioning.

On this page, you'll find prices for the PS4 Slim (the older, chunkier PS4 is discontinued now) and the 4K beast that is the PS4 Pro. We'll keep an eye out for the best prices for the consoles on their own along with highlighting the cheapest PS4/PS4 Pro bundles. Bundle deals come with popular discounted video games such as Spider-Man, and can also include extras such as controllers and other gaming accessories.

Make sure to check back in, as we are continually updating this page with any new PS4 deals that pop up.

The PS4 Slim is incredibly cheap nowadays and we've got the best prices from the biggest retailers directly below. It's certainly worth scrolling a little further though and checking out the PS4 Pro deals too as you might not have to spend as much more than you think for the 4K console instead.

PS4 Slim 1TB Console | $246.99 at Walmart
The larger 1TB PS4 is a must-buy at the right price compared to the standard 500GB version. So many games now have a minimum 50GB mandatory install, so the larger capacity is super handy if you have a decent-sized game collection.
View Deal

PS4 Slim 1TB Console | Only on Bundle | $248.99 at Walmart
A fantastic price, you can save $51 on this Only on PS4 Slim bundle at Walmart. The console includes a Jet black 1TB PS4, matching Dualshock4 wireless Controller, God of war, the last of US remastered, and Horizon Zero Dawn: Complete Edition games.
View Deal

PS4 Slim 1TB Console | Days of Play Bundle | $269.99 at Amazon
Get the limited edition Days Of Play Bundle on sale at Amazon for $269.99. The PlayStation 4 console comes in steel black and includes a 1TB hard drive and matching DualShock 4 wireless controller.
View Deal

1TB PS4 Slim | Fortnite DLC | $252.99 at Amazon
As well as a 1TB PS4 you're getting some neat Fortnite content for the free-to-play shooter. This includes the Neo Versa outfit, an Epic Neo Phrenzy Back Ring and 500 V-Bucks to splash on in-game content.
View Deal

1TB PS4 Slim | The Last of Us, God of War, Horizon: Zero Dawn | charging dock | headset | $301.08 at Walmart
This PS4 bundle does feature some older titles, but unlike other similar deals that throw a load of bargain games into a job lot to raise the price tag, you are actually paying less for the console than you usually would. Adding up the costs of the three games included here, you're only paying $245 for the PS4 Slim console and additional accessories - an excellent deal for both.
View Deal

PS4 Slim |Marvel's Spider-Man Bundle | $282 at Amazon
Get the popular PS4 Slim Spider-Man bundle on sale at Amazon for $282. This popular bundle includes a jet black 1TB PS4, dual shock 4 wireless controllers and Marvel’s Spider-Man game. It's actually cheaper to buy the console and game separately though this week to be honest.
View Deal

1TB PS4 Slim | Madden NFL 20 | accessories | $354.84 at Walmart
Madden 20 is still only available for over $50, so getting that and a bunch of accessories for $354 is a deceptively good deal. You're getting a headset, controller grip, charging station, case stand and thumb grips also included in this deal, making it far more valuable than your usual accessory fodder.
View Deal

1TB PS4 Slim | NBA 2K20 | controller grip | headset | $354.84 at Walmart
This deal comes in marginally cheaper in bundle form. NBA 2K20 is still a $50 game, so take that off the price tag and you're still saving money on the console itself when you take the included accessories into account. Still, if this isn't the game for you, or if you aren't fussed about the add-ons you might want to look elsewhere.
View Deal

1TB PS4 Slim | Star Wars Jedi: Fall Order, Titanfall 2 | headset | $360.22 at Walmart
Star Wars Jedi: Fall Order is only just hitting store shelves, so this bundle deal from Walmart offers a great deal on a brand new game, Titanfall 2, a headset, and a 1TB PS4 Slim console. You can get far cheaper prices if you're not looking for the new Star Wars game, though this is a must-buy if you are.
View Deal

1TB PS4 Slim | Days of Play Limited Edition Console | $335.54 at Walmart
We've seen prices go way higher than this for this limited edition blue console with gold symbols. If you like the look of it, we really wouldn't hang about for too long trying to decide as this could rocket back up to $500 in the blink of an eye.
View Deal

Ready for the ultimate in 4K PlayStation gaming? Check out the cheapest PS4 Pro prices that are currently available.

1TB PS4 Pro Gaming Console | $339.99 at Newegg
Get the PlayStation 4 Pro on sale at Walmart for $340. That's a $60 discount for this Sony gaming console that features 1TB of storage and 4K and HDR technologies.
View Deal

If you're buying a PS4, you'll probably need a cheap PlayStation Plus deal too. PlayStation Plus (aka PS Plus or PS+) allows you to play PS4 games online, along with access to the Instant Game Collection, a bunch of free games for PS4, PS3, and Vita each month. The default price for a year is $60. We've shopped around for you though and found a range of prices in our PlayStation Plus deals guide.

If nothing takes your fancy from the PS4 prices shown above, here's a selection of retailers that regularly stock the PS4 and PS4 Pro if you'd like to browse their stock directly.

Or, if you'd like to take a look at team green, check out the latest Xbox One bundles.