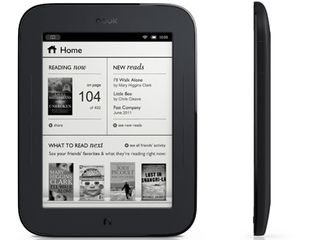 Nook, no buttons, no crannies

Dubbed the Simple Touch Reader, the Wi-Fi only gizmo features a 6-inch monochrome touchscreen and two months of battery life from a single charge.

"The Kindle 3 has 38 buttons. That's 37 more than the new Nook," William Lynch, CEO of Barnes & Noble, announced at the launch, adding that it was aimed at "those turned off by buttons, keyboards and complexity."

Both have stupid names, though

Nook Friends, a new feature developed for the Simple Touch Reader, allows you to see what your friends are reading, borrow and lend books, and recommend things to your contacts.

Which all sounds very handy, but it's the opposite of useful to those of us outside America as the Nook remains a US only product for now, with no word on plans to export the reader to the UK's fair shores.

The pocket-sized e-reader is no doubt intended to force another nail into the humble paperback's coffin, particularly with its alleged two-month battery life about which B&N was so keen to shout.

But paperbacks never need recharging; it's just not a war that the e-reader can win.