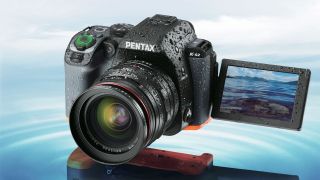 This new enthusiast-orientated DSLR is the Pentax reference camera first shown at CES 2015 – and it's a far cry from the Pentax K-S1 model it launched last year. The sensor specs are the same, but where the K-S1 comes across as a neon-lit novelty (actually, it's better than that), the K-S2 is a much more sober release with a robust design and, for Pentax, some technological firsts.

One of these is its fully-articulating rear screen, seen plenty of times on other DSLRs but never before on a Pentax. This uses 'airless gap' technology to fill the space between the LCD and its protective cover and improve visibility in bright conditions.

Another first is the K-S2's built-in Wi-Fi and NFC communication. Again, this has been done plenty of times before, but not by Pentax. This works alongside a dedicated smartphone app and allows you to control the K-S2 remotely.

This makes it sound like Pentax is playing catch-up with other DSLR makers, but the appeal of Pentax cameras has often been in the engineering and mechanical specifications. The in-built sensor-based SR Shake Reduction system has proved very effective in the past, the K-S2 can shoot continuously at 5.5 frames per second and the maximum shutter speed is 1/6000sec – a whisker faster than the 1/4000sec maximum of most direct rivals.

It comes with a new kit lens, too – a retracting 18-50mm f/4-5.6 lens we first described back when the K-S2 was simply a Pentax reference camera. This camera/lens combination is still bulky if you compare it to compact system cameras, but it looks usefully smaller than the average DSLR/kit lens combination. Even though it uses a retracting mechanism, this lens is weather-resistant, just like the K-S2 itself.

Other makers are experimenting with the removal of the anti-aliasing, or low-pass filters in front of the sensor to increase the very fine detail rendition, but Pentax has found a novel way of offering both options in one camera. The sensor has no low-pass filter, so there is, in theory, the possibility that you may see moiré interference effects with very fine patterns and textures. If so, you can use the camera's anti-aliasing 'simulation' mode. This applies a tiny vibration to the sensor during the exposure to minutely shift the photosites and replicate the effect of a low pass filter.

Exposure metering is taken care of by a 77-zone system which factors in subject position and distance, with centre-weighted and spot metering available too.

The autofocus system has 11 AF points, including 9 cross-type. It's not the most sophisticated, especially when it's paired up with cheaper Pentax lenses that don't have their own AF motors – but the new retracting kit lens has its own built-in DC motor, so the AF system should have a better chance to show its potential.

The K-S2 uses a proper glass pentaprism for its viewing system, unlike the cheaper 'pentamirror' designs in entry-level DSLRs.

The twin control dials make it much easier to apply manual shutter speed and lens aperture adjustments and are a must-have for most enthusiasts.

No lens is perfect, but the K-S2 can correct distortion, vignetting and color fringing internally (with Pentax lenses) and a new Clarity Enhancement option gives a localised contrast boost to your images for extra 'punch'.

It goes on sale at £650/US$800 (about AU$1037) with the retracting 18-50mm lens. You get a choice of colors (this is Pentax, after all) – the Nature Collection offers Forest Green, Desert Beige or Stone Gray, while the Sports Collection includes White x Lime, Black x Pink, White x Racing Stripe and Black x Racing Stripe. Other body/lens bundles will be available.