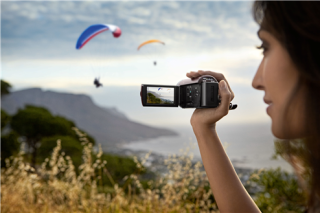 Golfers rejoice - Sony is here to fix your swing

Sony has unveiled a number of additions to its camcorder range, with 15 new models to its Handycam range and a new model for capturing day to day footage.

The Handycam range includes both HDD and Flash memory-based models, as well as a dual memory cards slots on the HDR-AX2000E, a professional camera that can be bought in both SD and Memory Stick formats.

This means the heavyweight machine can keep shooting footage even when one of the cards is used up, and a large 3.2-inch LCD screen to check out your footage.

Sony is also claiming that its mid-to-high-end HD camcorders will also be more stable, thanks to combining optical and electrical image stabilisation in a '3-way' (come on, don't be immature) anti-shake performance.

Although the range comprises of both SD and HD capable models, each one (apart from the lower level SD models) will be using Sony's Exmor R CMOS Sensor with 2x increase in sensitivity, with an increase in light sensitivity.

All the HD models capture to AVCHD and record in 24fps, thus offering the smoothest playback available on the format.

And to top it all off, Sony has added in Golf Mode – yes, now you can check your swing frame-by-frame, with a series of hi-res images recorded at 200fps, with a slow motion video highlighting how badly you shanked the ball into the rough.

All these lovely new camcorders from Sony will be available from February 2010.